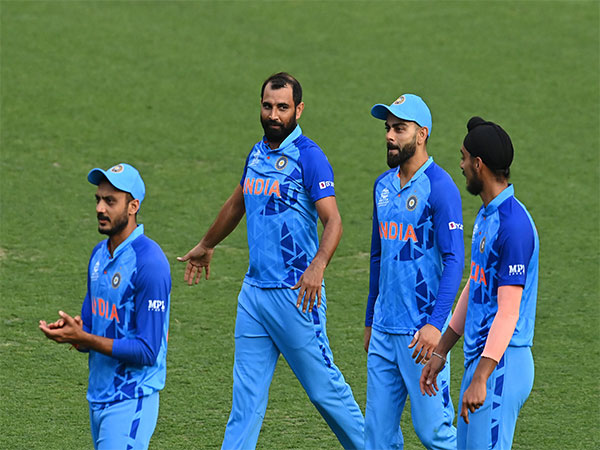 BRISBANE: A brilliant knock from K L Rahul and a three-wicket haul masterclass by Mohammed Shami helped India inflict a 6-run defeat on Australia and bundled out the hosts for 180 in the ICC Men’s T20 World Cup warm-up match at the Gabba here on Monday.

Chasing a target of 187, Australia got off to a good start as their openers Aaron Finch and Mitchell Marsh gathered 52 runs in five overs without losing a wicket. The 64-run partnership stand for the first wicket was broken as Bhuvneshwar Kumar delivered a big blow to Australia dismissing Marsh for 35 off 18.

Marsh’s wicket invited Steven Smith to the crease. In the 10th over of the innings, Finch and Smith hammered Harshal Patel for 15 runs. In the 11th over Yuzvendra Chahal broke the Australian momentum as he removed Smith for 11 off 12. Australia’s star all-rounder Glenn Maxwell then came out to bat.  Maxwell slammed Chahal for 15 runs while hammering back-to-back two fours in the 13th over of the match.

Finch, in lethal form, destroyed Arshdeep Singh as he slammed the Indian bowler for 17 runs in the 14th over of the innings. Finch also brought up his 50 while hammering Indian bowlers all around the ground. At this point, no Indian bowlers were able to restrict Australian batters from smashing runs.

Experienced pacer Bhuvneshwar gave his team a big breakthrough as he dismissed Maxwell for 23 runs off 16 balls. In the last three overs, Australia needed 29 runs to win.

Harshal Patel was brought back into the attack and he proved his captain’s decision right as he removed well-set batter Finch for 79 off 54 in the 19th over of the innings. The Australian captain’s knock was decorated with seven fours and three sixes. In the same over, Tim David was run out by Virat Kohli.

In the penultimate over, Australia needed 11 runs to win and Virat Kohli displayed his fine fielding as he took a one-handed catch of Pat Cummins. On the very next ball of the over, Ashton Agar was run out without opening his tally. On the fifth delivery of the over Shami bowled out Josh Inglis for one run and bundled out the hosts for 180. Shami delivered a stunning last-over spell of 2, 2, W W W W, helping India to defeat Australia by 6 runs.

Earlier, K L Rahul smashed 57 off 33 while Suryakumar Yadav scored 50 off 33 to guide the Men in Blue to a total of 186/7. For Australia, Kane Richardson scalped a stunning four wickets while Glenn Maxwell and Ashton Agar bagged one wicket each.

Put to bat first, India got off to a decent start as their opener K L Rahul hammered Australian bowlers all around the ground, smashing 56 runs in just five overs of the innings. While smashing Australian bowlers, Rahul brought up his half-century in 27 balls.

Skipper Rohit Sharma also shifted gears and hit Glenn Maxwell for a six and a four in the sixth over of the innings. At the end of the powerplay, Team India’s score read 69/0.

In the 8th over of the innings, Maxwell provided his team with a big breakthrough as he dismissed blistering batter Rahul for 57 off 33 deliveries. Rahul’s wicket invited in-form batter Virat Kohli to the crease.

Ashton Agar then provided his team with a big wicket of India captain Rohit as the batter tried to pull a deep mid-wicket shot but handed an easy catch to Maxwell in the 9th over of the innings. The India captain departed after scoring 15 runs in 14 deliveries. After 10 overs of the play, India’s score read 89/2.

New batter Suryakumar Yadav and Kohli joined hands to slam Australian bowlers for boundaries while taking singles at regular intervals. Kohli’s stint on the crease was cut short as he was dismissed by Mitchell Starc after scoring for 19 from 13 balls.

Hardik Pandya then came out to bat on the crease, but the latter could not do much as he departed after just scoring two runs on the delivery of Kane Richardson. India kept losing wickets at regular intervals as the batters struggled to play against Australian bowlers after 10 overs.

Dinesh Karthik then came out to bat. Karthik tried to pull a shot but it went straight to the fielder stationed at deep mid-wicket on the delivery of Richardson. Karthik departed after playing a cameo of 20 runs in 14 deliveries.