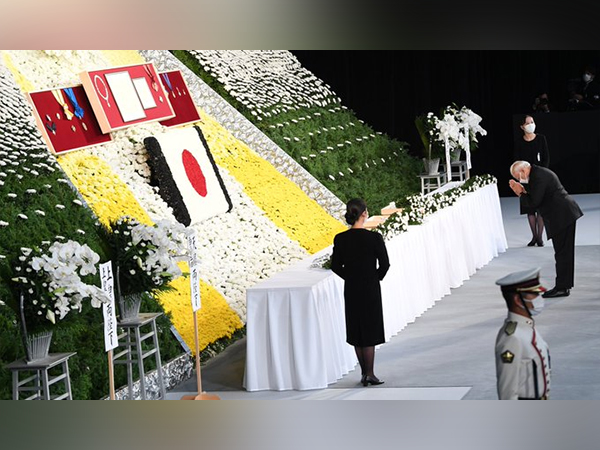 “When I was in Tokyo earlier this year, little did I imagine I would be back for the solemn programme of former PM Abe’s state funeral. He was a great leader, a phenomenal individual and someone who believed in India-Japan friendship. He shall live on in the hearts of millions!”

PM Modi is in Tokyo to attend the state funeral of the former Japanese PM which was held today at Nippon Budokan in the presence of several top world leaders.

After attending the state funeral, Prime Minister Narendra Modi met with Akie Abe, wife of Shinzo Abe at Akasaka Palace and conveyed his condolences on the tragic loss.

Modi also met with his Japanese counterpart Fumio Kishida and conveyed his deepest condolences on the demise of former Prime Minister Abe. “Prime Minister also had a brief interaction with PM Kishida to reiterate his condolences,” Bagchi added.

“The two leaders had a productive exchange of views on further deepening bilateral relations. They also discussed a number of regional and global issues,” the Ministry of External Affairs (MEA) said in a statement.

Both leaders renewed their commitment to further strengthening the India-Japan Special Strategic and Global Partnership and working together in the region and other international groupings.

Japan had imposed tight security measures in Tokyo as representatives from several countries, including dozens of heads of state and governments participated in the state funeral.

Modi, who landed in Japan on Tuesday morning, noted the contributions of the late Japanese PM in strengthening the India-Japan partnership and conceptualizing the vision of a free, open and inclusive Indo-Pacific region.

On Monday, foreign secretary Vinay Kwatra had said the trip was an opportunity for PM Modi to honour the memory of his dear friend and a champion of India-Japan ties.

“This visit by PM Modi is an opportunity for him to honour the memory of former PM Abe, who he considered a dear friend and a great champion of the India-Japan relationship,” the foreign secretary said at a special briefing.

He said Abe made significant contributions to deepening India-Japan relations, turning a primarily economic relationship into a broad, comprehensive, and strategic partnership, making it pivotal for the two countries and the region’s security.

“His famous ‘Confluence of Two Seas’ speech in the Indian Parliament in 2007 laid the ground for the emergence of the Indo-Pacific region as a contemporary political, strategic, and economic reality. Abe’s contribution to India-Japan relations was recognized by the conferment upon him of the prestigious Padma Vibhushan in 2021,” Kwatra said. (ANI)