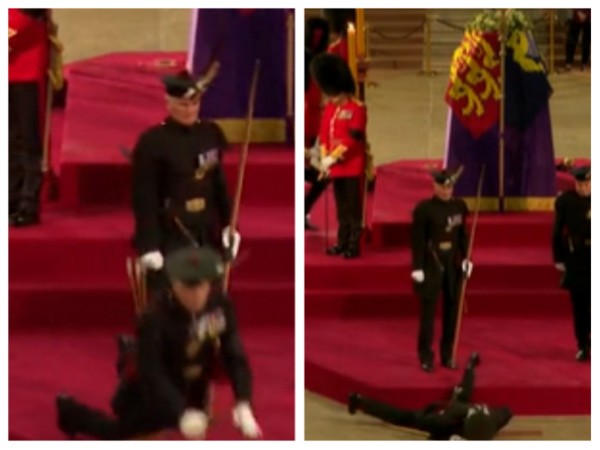 LONDON: A video has gone viral on social media that shows one of the royal guards standing next to Queen Elizabeth II’s coffin fainting and falling right to the floor.

A video shared by 9News Sydney’s Twitter account showed a guard clad in a black uniform first stumbling from his position and then moments later falling flat on the ground.

As seen in the video, three other guards came to his rescue and helped him get emergency aid. The guard’s collapse comes as hundreds of thousands of mourners thronged the streets of London to pay homage to the late Queen.

Queen Elizabeth’s coffin draped in the Royal Standard is now lying in state in London’s Westminster Hall where it will remain for four days until her funeral on Monday.

Borne on a gun carriage and accompanied by the boom of artillery cannons and the tolling of Big Ben’s bell, the coffin of Queen Elizabeth II was transported on Wednesday from Buckingham Palace to the Palace of Westminster, as per New York Post.

King Charles III, in full dress uniform and carrying a Field Marshal’s baton, walked behind the coffin, joined by his sister, Princess Anne, and their two brothers, Prince Andrew and Prince Edward. His elder son and heir, Prince William, newly named as the Prince of Wales, walked behind him, next to his brother, Prince Harry.
The cortege passed by the most familiar symbols of royal London, from Buckingham Palace to the wide, tree-lined vista of the Mall, then past government institutions on Whitehall and Downing Street, before arriving at Westminster Hall, the oldest part of the Parliamentary estate.

Westminster Hall, which sits in the shadow of Big Ben, is one of the most hallowed places in British public life, as per the media portal. The British Queen breathed her last at Balmoral Castle in Scotland on September 8.
The death of the 96-year-old Queen ended a generation-spanning, seven-decade reign that made her a beacon of stability in a tumultuous world. The UK has entered a period of official mourning, with tributes pouring in worldwide. (ANI)