During an #AskSRK session on Twitter, a fan asked the ‘Dilwale’ actor, “What about this man @imVkohli.” 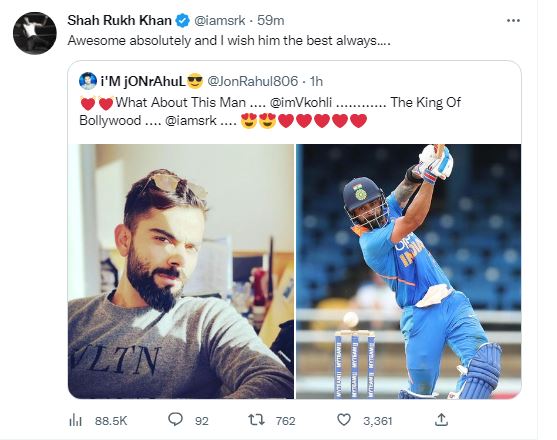 To which the actor replied, “Awesome Absolutely and I wish him the best always.”

Kohli scored a stunning century in India’s victory against Sri Lanka in the first ODI in Guwahati on Tuesday and has moved up two spots to 6th, as per ICC.

The Indian batsman slammed his 45th ODI century and, overall his 73rd in international cricket, on Tuesday. The batter accomplished the landmark during India’s first ODI against Sri Lanka at Barsapara Cricket Stadium in Guwahati.

Meanwhile, SRK will be next seen in an upcoming action thriller film ‘Pathaan’ which is all set to hit the theatres on January 25, 2023.

Recently the makers unveiled the official trailer of the film which received massive responses from the fans.

The approx two-and-a-half-minute-long trailer showcases Shah Rukh Khan and Deepika as spy agents standing against a powerful enemy, played by John Abraham, who is planning a big attack in India.

Apart from this, he will also be seen in filmmaker Rajkumar Hirani’s ‘Dunki’ opposite Taapsee Pannu and Atlee’s ‘Jawan’, which will hit the theatres on June 2, this year. (ANI)