MUMBAI: South actor Rashmika Mandanna is all excited for ‘Pushpa: The Rise’ sequel as she shared a glimpse from the sets of the film.

Taking to her Twitter account, she posted a behind-the-scenes picture where the team can be seen working on the film. She wrote, “look at thaaaat! it’s starting y’all.”

Recently, actors Allu Arjun and Rashmika Mandanna were seen hosting a puja for its sequel ‘Pushpa: The Rule’ with the cast and crew.
A fan club with the username Allu Arjun Folks on Twitter shared a picture from the ceremony. 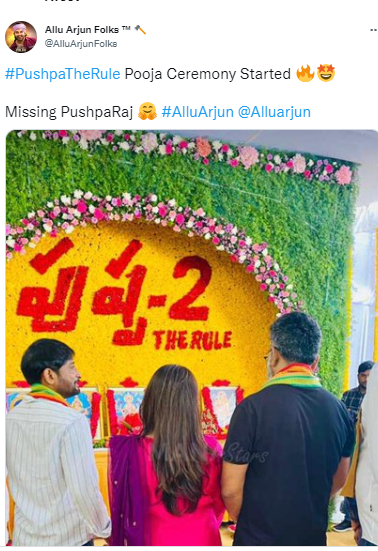 Rashmika Mandanna was seen in ethnic wear along with crew members of the film. Allu Arjun was, however, not spotted in the pictures from the ceremony as he was in New York for the India Day celebration in the Big Apple.

‘Pushpa: The Rise’, an action entertainer directed by Sukumar, was released in theatres on December 17, 2021, and has been widely praised. It has been produced by Naveen Yerneni and Y Ravi Shankar of Mythri Movie Makers in association with Muttamsetty Media.

The movie that stars Allu Arjun as Pushpa Raj also features Rashmika Mandanna in the lead role of Srivalli.

Meanwhile, on the work front, Rashmika was last seen in ‘Goodbye’ alongside Amitabh Bachchan and Neena Gupta. She will be next seen in ‘Mission Majnu’ alongside Sidharth Malhotra and in director Sandeep Reddy Vanga’s next ‘Animal’ opposite Ranbir Kapoor. (ANI)