NEW DELHI: The National Commission for Women (NCW) on Thursday sent a two-member committee to the Guru Teg Bahadur Hospital in the national capital to meet the Ghaziabad-based victim of gangrape and her family.

The team is also scheduled to meet with the Ghaziabad police in connection with case of the alleged kidnapping of a woman and her torture for two days. 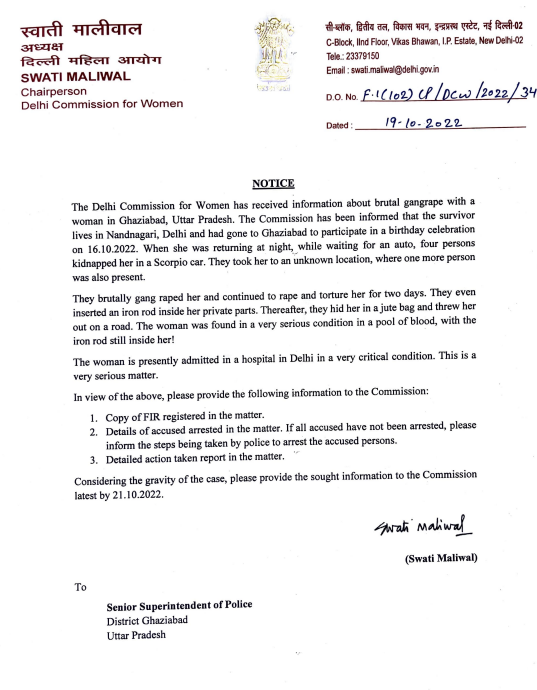 The Delhi Commission for Women has also taken cognizance and sought information in the said case latest by Friday (October 21).

The case pertains to the matter where a woman was found lying in a pool of blood in a jute bag after she was allegedly abducted and gang-raped for two days. The Uttar Pradesh police have detained four persons accused in the case and have been taken into custody while the investigation is still under way.

According to the police, they were informed about the gangrape in a complaint filed by the woman. “We got the information about the gang rape two days ago in which a woman had complained about the incident. As per the rape survivor, all the accused were known to her and a property dispute between the two has come to light,” Superintendent of Police (SP) City Ghaziabad Nipun Aggarwal had said.

The woman was allegedly abducted while she was returning from a birthday party on September 16. She told police that five men in Ghaziabad gang-raped her over two days.

“On October 18, police in Nandgram, Uttar Pradesh received information that a woman was lying near Ashram Road. They took her to the hospital. She’s a resident of Delhi and had come to her brother’s residence in Nandgram,” SP, Ghaziabad said.

Meanwhile, DCW Chief Swati Maliwal, in the notice sent by the commission to Ghaziabad police, said, “They brutally gang raped her and continued to rape and torture her for two days. They even inserted an iron rod inside her private parts. After that, they hid her in a jute bag and threw her out of the road. The woman was found in a pool of blood with an iron rod still inside her.”

“When the woman was admitted to the hospital, the rod was removed with great difficulty; the woman is now fighting for her life. We have issued a notice… there should be a swift arrest and strict action taken. This case is just like the Nirbhaya case… It is my appeal that at least this case be fast-tracked and these men be given severe punishment,” Maliwal had said. (ANI)