KOCHI: Boby Chemmanur, a Kerala-based gold trader who is on a tour of the state with a gold statuette of football legend Diego Maradona and will later fly off to watch the ongoing FIFA World Cup in Qatar, reached Kochi on Thursday.

An avid follower of the beautiful game and an self-confessed Argentina fan, the gold trader will travel 812 kms with the golden statuette on an open-topped vehicle before jetting off to Qatar.

While watching the World Cup action from the stands in Qatar figures prominently in his plans, Chemmanur told ANI that his primary objective is to reach out to students through the sport that unites all and enlist their support against drug use.

On Thursday, Chemmanur visited two colleges in Kochi where he made students take a solemn pledge never to use drugs. The gold trader also launched a project to empower students with the goal of ‘India will play football in the next World Cup’, durig his visits to these campuses.

Students and the general public are also being enlisted for participation in the initiative to achieve ’10 Crore Goals’ by supporting Maradona’s message of ‘football addiction against drug addiction’.

Speaking to ANI, the gold trader said, “Maradona wanted to convey his message with the punchline, ‘Football addiction against drug addiction’. He had agreed to come to India to launch this campaign here, but left us before his plan could come to fruition. While he has gone to heaven, the onus is on us to take the message forward and complete his unfinished task.”

Sharing a close encounter with the footballing god, Chemmanur said he once met Maradona in Dubai and tried gifting him a golden football. “But he said he didn’t want the golden football and, instead, wanted to him carve a golden statue of him scoring his ‘favorite goal which made Maradona’.”He added that the footballing legend, nicknamed ‘El Diego’ during his playing days, wanted the statue tobe of 5.5 feet.

“I regret not being able to keep his reqest during his lifetime. However, I have made it now. The ball is made of pure gold and so are the magical feet,” he said.Chemmanur also recalled requesting Maradona to help India play the FIFA World Cup ‘at least once’.

“Maradona had promised to open an Argentina Football Academy (AFA) and arrange internationally reputed football trainers to work with students at schools and colleges across India,” he said.

On his favourite team losing 1-2 to Saudi Arabia in their World Cup, the gold trader said ruefully, “Of course, Argentina lost the ‘opening’ game.”

“The hosting rights of the FIFA World Cup was with Europe for long. But this year, it’s being hosted closer to us and I hope India will also get to host the event in the forseeable future,” he said, adding that the same was the underlying motive behind his journey to Qatar.

Chemanur set off his journey on November 21, from Thiruvananthapuram. The golden statuette of Maradona, which will remain his constant travel companion, is named ‘Hand of God’, after his famous goal against England 1986 FIFA World Cup in Mexico. 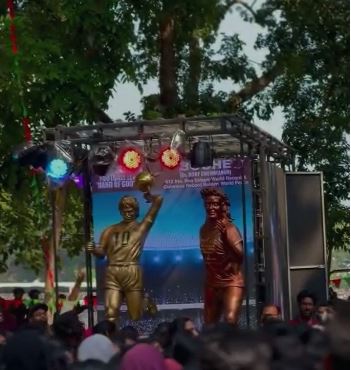 The team led by Chemmanur will be travelling through Karnataka, Goa and Mumbai before heading to Qatar with the golden statuette of his footballing hero.

The statuette will be displayed at major football stadiums of Qatar before being handed over to a prominent museum there. (ANI)