MUMBAI: Actor Kangana Ranaut on Sunday shared a glimpse of the newly renovated temple at her Mumbai home on social media.

The ‘Queen’ actor took to her Instagram Story where she was seen dressed in a cream-beige suit, sitting next to a priest in the temple. There was an idol of Lord Ganesha in front of her. There was a large, framed Pichwai painting behind the idol, leaning on a colourful wall. Next to her were also garlands of marigold, some fruits and food in steel utensils.
Sharing the post, she wrote, “This festive season renovated temple at home.” 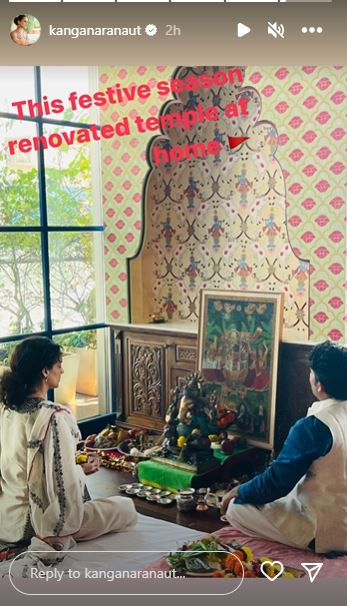 Talking about Kangana’s upcoming projects, she will be seen in ‘Tiku Weds Sheru’ marks the first project produced by Kangana’s production house, Manikarnika Films. Helmed by Sai Kabir, the film stars Nawazuddin Siddiqui and Avneet Kaur in the lead roles. The film is all set to premiere exclusively on Amazon Prime Video. The official release date from the makers is still awaited.

Apart from that, she also has the period drama ‘Emergency’ in which she will be seen portraying the role of late Prime Minister Indira Gandhi. ‘Emergency’ marks Kangana’s first solo-directorial film.