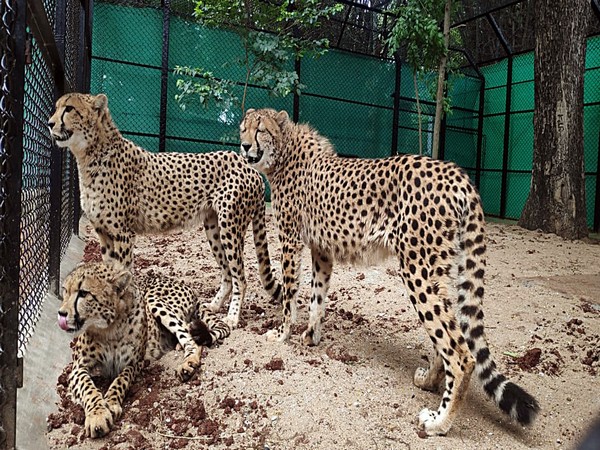 NTCA Member Secretary S P Yadav in an exclusive interview with ANI said, “We are getting eight cheetahs out of which five are female and three are male at Kuno National Park, Sheopur, Madhya Pradesh.”

The Prime Minister will launch the cheetah reintroduction project on September 17 at MP’s Kuno National Park.
Yadav added, “This is a big and historic time and there is no other example like this in the entire world where it is being released and brought from one continent to another and all the international standards are being followed for this.”

“As of now, our plan is to have bring the cheetahs on September 17 and for this we hired a chartered cargo plane. The cheetahs will come to Jaipur from Windhoek, Namibia’s capital, and then by helicopter to Palpur Kuno National Park. There will be a programme to release them, the helipad has also been built,” SP Yadav told ANI.

“It will be a historic moment to bring cheetahs back to India. You know that in 1947-48, the last three cheetahs were hunted by the Maharaja of Korea in Chhattisgarh and the last cheetah was seen at the same time in 1952 the Government of India declared Cheetah as extinct and since then we are restoring cheetahs after almost 75 years.”

“Cheetahs will be brought in quarantine for the first 30 days, quarantine arrangements are made, their health and other parameters will be monitored and after that when it is found that they are completely healthy after testing them, they will be put in large enclosures” Yadav added.

Yadav further said that “The enclosure in 6 sqkm and it has nine compartments, of which eight are for cheetah and when it will be left in the large enclosure after quarantine. Monitoring will be done whether cheetah has adapted to the climate of the country or not and whether he is feeling comfortable or not and all these will be monitored very closely.”

The NTCA Member Secretary said, “When it seems that cheetah is completely adopted the atmosphere then we will release it in the open forests but before release, a radio collar has already been installed in each leopard and every leopard will be monitored 24 hours by the surveillance team.”

“Every cheetah is to be monitored and there will be a team behind it, which change its duty in eight to eight hours. For the safety of cheetahs, we have formed a ‘Cheetah Mitra’, an awareness program has been run among the people so that people are aware of Cheetah. All protocol for safety and security for Cheetah will be maintained,” he added.

Prime Minister Narendra Modi will inaugurate the “Reintroduction of the Cheetah” project at the Kuno National Park in the Sheopur district of Madhya Pradesh on September 17. PM Modi will also release cheetahs being brought from Africa into the state’s forests. The big cat species will be reintroduced in India after 70 years since being declared extinct in 1952. (ANI)