“This is fake – I did *not* tweet out a link to The New York Times!” tweeted Musk. 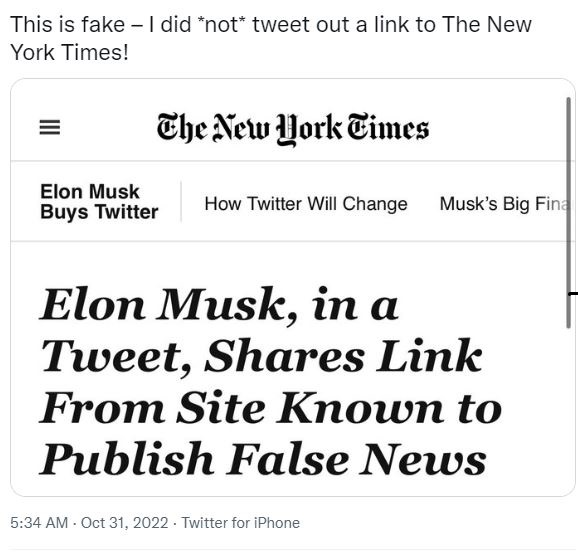 The tweet by Musk, which was later deleted, posted an article that made baseless allegations about the attack on House Speaker Nancy Pelosi’s husband, reported NYT. The tweet raised new questions about how, or if, Musk will act to combat misinformation and hate speech on the social media site.

In a reply to Clinton’s tweet, Musk wrote, “There is a tiny possibility there might be more to this story than meets the eye”, and then shared a link to an article in the Santa Monica Observer. The article alleges that Pelosi was drunk and in a fight with a male prostitute.

Musk’s tweet was later deleted, and it was not immediately clear who had deleted it, reported NYT. The tweet from Musk came on the heels of his vow in an open letter to advertisers that Twitter would not become a freewheeling site that allowed entirely unfettered commentary.

“Twitter obviously cannot become a free-for-all hellscape, where anything can be said with no consequences,” he wrote. “Twitter aspires to be the most respected advertising platform in the world.”

A 2021 editorial in The Los Angeles Times about websites that “masquerade as legitimate local newspapers” noted that the Santa Monica Observer, “owned by onetime City Council candidate David Ganezer, is notorious for publishing false news.”

In 2016, for example, the publication advanced a claim that Clinton had died and that a body double was sent to debate the Republican presidential nominee, Donald J Trump. (ANI)