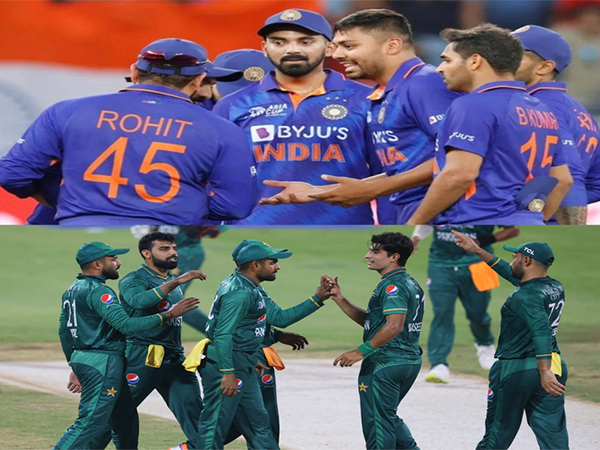 DUBAI: Another high-octane India versus Pakistan clash is set for Sunday, as both arch rivals will be looking forward to making the best out of their opening Super Four match at the ongoing Asia Cup 2022.

Notably, India and Pakistan had clashed in a moderate-scoring thriller. This was a match which opened their campaigns at the Asia Cup 2022. India made a winning start to its title defence, defeating Pakistan by five wickets. Hardik Pandya (3/25) and Bhuvneshwar Kumar (4/26) had helped in bundling out Pakistan for 147 in 19.5 overs. Rizwan was Pakistan’s top scorer with 43.

Chasing 148, Virat Kohli (35), Ravindra Jadeja (35) and Hardik Pandya (33*) made contributions that guided Team India to a five-wicket win with two balls to spare. Mohammed Nawaz (3/33) and Naseem Shah (2/27) delivered solid performances for their side with the ball.

But the stakes are high this time around. Both teams are looking forward to start their Super Four Phase with a victory which will make their road to the Asia Cup final easier. Fans are also praying that both Asian giants do well going ahead so that they battle it out in the final as well.

The Indian top order consisting of K L Rahul, Rohit Sharma and Virat Kohli will have to deliver their best in this match. While Virat seems to have shed some rustiness after his unbeaten 59* against Hong Kong, openers Rahul and Rohit are still struggling to give a positive start and make the most out of their powerplay. For Rohit, the task will be to get among the runs again while for Rahul, it will be not only about scoring, but also maintaining a healthy strike rate.

The Indian middle order has shown more reliability as of late. The likes of Suryakumar Yadav, Hardik Pandya, Rishabh Pant, Dinesh Karthik, Deepak Hooda have stepped up and taken responsibility whenever they needed to. Swashbuckling batters like Suryakumar, Hardik, Pant will be looking forward to showcasing their wide variety of strokes against a quality Pakistan attack.

Indian bowling has been good largely, with likes of Bhuvneshwar Kumar, Arshdeep Singh and Hardik Pandya delivering not only key wickets, but also economic spells. Pacer Avesh Khan’s expensive outing against Hong Kong, in which he conceded 53 runs in four overs, is a cause of worry. It will be interesting if Avesh gets the backing of team management despite leaking runs with the ball of late.

Ravindra Jadeja, India’s most trusted all-rounder, will miss out due to an injury and his side will miss his services in all three departments on the field dearly.

Spinner Yuzvendra Chahal and Axar Patel (who has replaced an injured Ravindra Jadeja) will also be looking to be as dominant as pacers on UAE pitches, which have largely benefited India’s pace attack.

Coming to Pakistan, they are heading into the match with their morale high after crushing Hong Kong by 155-runs. Though their dependency on star batter Babar Azam is a concern. It was great seeing the likes of Mohammed Rizwan, Fakhar Zaman and Khusdil Shah making up for Azam’s underwhelming performance and scoring runs.

Azam will be aiming to regain his best form for this crucial clash. Pakistan should also exercise caution while playing Indian bowlers as it is not Hong Kong or any other associate team playing against them this time. They are going toe to toe with a team that is just as world-class as theirs.

Spinners have been Pakistan’s biggest assets in this tournament, with spinner Mohammad Nawaz leading the bowling charts with six wickets under his belt. Leg-break bowler Shadab Khan is not too far, sitting at third with five wickets. Pace and spin will have to deliver brilliantly if Pakistan is to win this match.

Irrespective of what the result is, Asia Cup 2022 is set to deliver yet another ‘Super Sunday’ in Asian households, a continent housing millions of obsessed cricket lovers. Many of them will flock to the stadium to catch the action, but the idea of catching live action on TV with friends, family and some delicious food by their side will also be great.