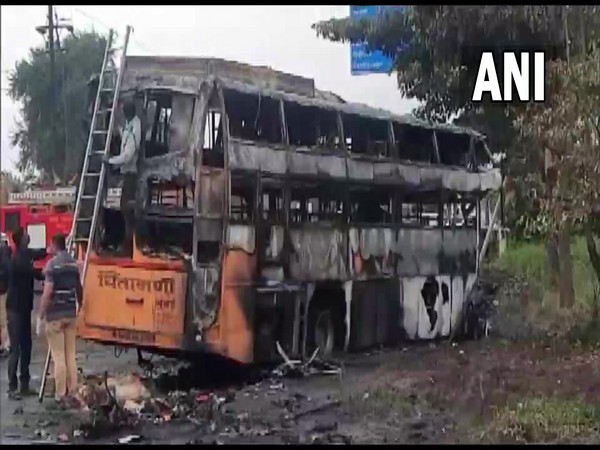 NEW DELHI: President Droupadi Murmu, Prime Minister Narendra Modi and Maharashtra Chief Minister Eknath Shinde have condoled the loss of lives in the accident in which a bus collided with a truck and caught fire in Nashik city in the early hours of Saturday.

At least 11 persons, including a child, died and over 20 people were injured after a Mumbai-bound bus caught fire after a collision with a trailer truck in Maharashtra’s Nashik on Saturday morning said Nashik city police, adding that the injured people have been taken to hospital.

Prime Minister Modi and Chief Minister Shinde also announced ex-gratia for the kin of the deceased.

“I am deeply saddened to learn of the death of many people in a bus fire accident in Nashik. I express my deepest condolences to the families who lost their loved ones. I wish the injured people a speedy recovery,” President Murmu said in a tweet.

The Prime Minister’s office tweeted, “Anguished by the bus tragedy in Nashik. My thoughts are with those who have lost their loved ones in this mishap. May the injured recover at the earliest. The local administration is providing all possible assistance to those affected.”

The PM further said that ex-gratia of Rs 2 lakh will be given from the Prime Minister’s National Relief Fund (PMNRF) to the kin of the deceased and Rs 50,000 to those injured in the accident.

Chief minister Shinde also announced an ex-gratia of Rs 5 lakh to the next of kin of each of the deceased. Shinde further said that the state government will bear the expenses of the treatment for the injured people in the accident.

Guardian Minister of Nashik, Dada Bhuse told ANI that the passenger bus was headed to Mumbai from Yavatmal when it collided with a truck which was on its way to Pune from Nashik. “All the injured are being treated in Nashik and the state government will bear all the medical expenses of those injured. The CM has announced an ex-gratia of Rs 5 lakh rupees each to the next of kin of those who died in this unfortunate incident. I am also going to the spot to assess the situation, Bhuse said.

“A luxury bus and a trailer truck collided with each other. A fire broke out due to the impact. There are 11 casualties so far. Thirty people had started from Yavatmal and 19 people boarded the bus in the middle. They are being identified,” Nashik Police Commissioner Jayant Naiknavare said.

All senior officials including the Collector, Municipal Commissioner and Police Commissioner were on the spot to coordinate rescue operations, the official said. The Nashik administration has set up a control room and issued contact numbers for disaster management and the district civil hospital to give and receive more information about the victims in the mishap.

Deputy Chief Minister Devendra Fadanavis offered his condolence to the families and said, “Deeply pained to know about the unfortunate accident of a private bus and tanker in Nashik. Heartfelt condolences to families who lost their loved ones. Praying for the speedy recovery of the injured.”

He further said that all the injured were admitted to Civil Hospital and provided immediate assistance and for the coordination, MLA Devyani Pharande Tai too at the hospital.