The stories of sexual harassment that have been tumbling out from the closet have alarmed us all. But while we, the fans and readers, are still coming to terms with it, an evidently shaken showbiz is picking its broken pieces and putting efforts in the direction of amends. In fact, the Producers Guild of India had also extended its support to the #MeToo movement. Even Bollywood biggie Aamir Khan sat with the board to discuss measures regarding the same. We had told you the inside details as to how they planned to put a body in place which will make sure women in the industry feel safe.

An insider was quoted saying, “Taking a stand without intending to do something is not something which Aamir believes in and that was clearly seen in the meeting with the Guild. He was heard saying that this social media activism isn’t something that will take us anywhere but we need to come up with exact remedies. These problems didn’t originate on social media, so the solutions will also not come on social media. It’s a day to day real life issue.” And now, within the first week of setting up a special committee on sexual harassment, the Guild has issued an official statement clarifying the amends to its bylaws. 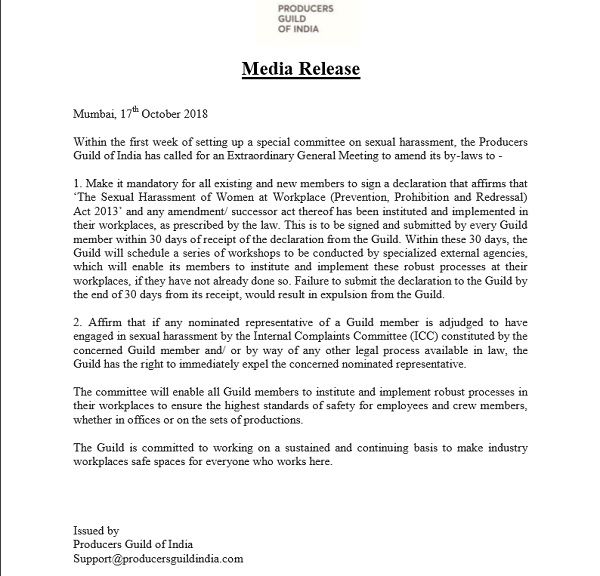 Earlier, the Guild had also released a statement ensuring that there will be action. It read, “We believe that there is an urgent need to set up a robust process to ensure the highest standards of safety for employees and crew members at the workplace – whether in offices or on sets of productions. We are instituting a committee within the Guild to lead this effort, and we are determined to stay the course till workplaces in the industry are safe spaces for everyone.

Kareena Kapoor Khan to turn a modern bride at the India...

A sleepy Taimur Ali Khan heads off to the Maldives with...

Tuesday Trivia: Did you know Priyanka Chopra made her silver screen...

Special pictures from Sonam Kapoor’s marriage that showcases the moods of...