Neha Dhupia is certainly basking in happiness as she is all set to welcome her first child with Angad Bedi, with whom she got hitched earlier this year at a Gurudwara in Delhi, with their respective families in attendance. While the duo kept the pregnancy hidden, just like their hush-hush wedding, they recently announced the good news on their Instagram handle with oh-so-adorable pictures. Needless to say, the glow on Neha’s face is quite visible and we are loving it. However, the new phase of her life hasn’t distracted the Helicopter Eela actress from work.

Neha, who introduced her chat show #NoFilterWithNeha, back in the year 2016, is back with the third edition and shoot for the same has already commenced. The show’s first celeb this season is going to be Ayushmann Khurrana. The actor was all happy as he struck a pose with the host and dost, and also spoke about his journey as a Roadies contestant. The reality show, which airs on MTV India, is being mentored by Neha and hence it will be great to see them interact on the same. 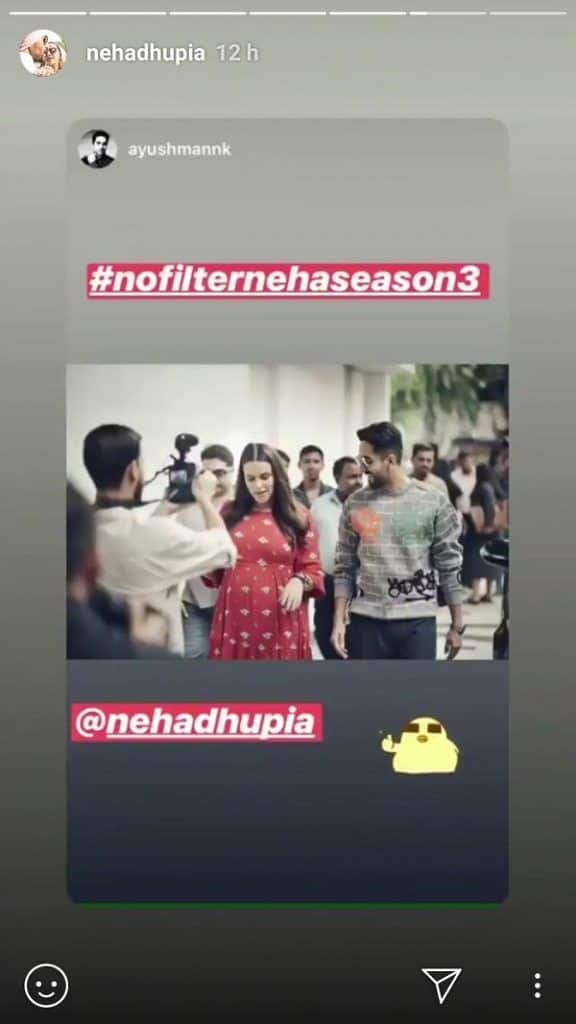 Giving out a few more interesting details about the third season of Neha’s show, a source close to Mumbai Mirror has revealed that, the actress will be shooting till the month of October, which happens to be the eighth month of her pregnancy. The show will comprise of 12 episodes, which will reportedly have celebs like Deepika Padukone, Katrina Kaif, Salman Khan and Vicky Kaushal, gracing it. Interesting, we say!

Earlier, in an interview with Spotboye, Neha had said, “I actually bumped into a few guys from Saavn at a car parking. While conversing with them, they said, ‘you’re very funny and you should have an audio show of your own.’ I always wanted to do something ‘unfiltered’. Also, Rishi Malhotra (CEO, Saavn) and his team had a great role to play. They came up with a lot of ideas.The entire experience was very flattering because the audience loves it. No product is a hit if no consumer is consuming it. Also, the most important part was the guests and celebrities who I invited. They all came without actually knowing what the show is all about. I used to just ask them, ‘hey I’m doing an audio show and will you come and talk to me for an hour in a room?’ Even I didn’t know what it was going to be but everyone was just there! It was awesome.”

Video: Ranveer Singh and Rohit Shetty are in playful mood on...

Sara and Ranveer have a gala time shooting for Simmba in...

Prince Narula to play a snake charmer in Naagin 3