The 71st British Academy Film Awards (BAFTA Awards) were held in London’s Albert Hall with Prince William and the Duchess of Cambridge in attendance. The entertainment industry’s biggest stars gathered to celebrate not just cinema but also support of the Times Up movement. The color black was sported by all as a mark of solidarity with survivors of sexual harassment and the ongoing #MeToo movement, there were little exceptions here and there (one being the Duchess herself).

Although clothes were not the prime focus of the evening as the point to wear black was much larger than just making a fashion statement, there were stars who shone and stars who…well didn’t shine as bright as their contemporaries.

Here’s a look at some of the best and worst dressed celebs at the BAFTA gala: Actress Jennifer Lawrence looked like a true-blue Hollywood star in her black Dior strapless corset gown, which was cinched at the waist. She went a step further with a sheer, milky lace back which also doubled up as delicate sleeves. Her hair, neatly parted from the center, lended more structure to her face. 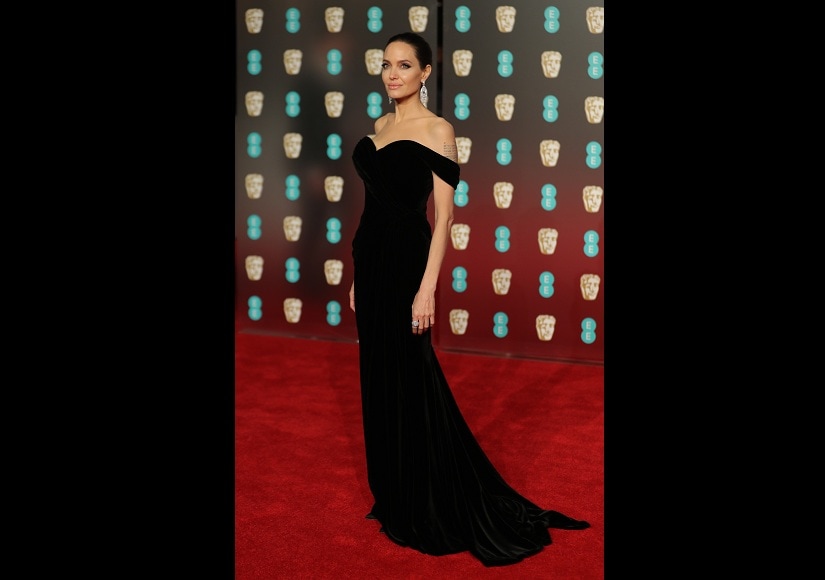 Angelina Jolie’s black off-shoulder gown reminded us of her iconic, Oscars 2012 look, and her ever-so-famous ‘right leg out’ pose. However, there wasn’t so much leg at the BAFTAs but the Hollywood star still managed to outshine others with her elegant ensemble. British actress Naomi Harris was a breath of fresh air as she ditched the floor-length gown for a Zuhair Murad jumpsuit. The gold motifs and black tassels made her stand out and her cigarette pants rounded off the look. Basking in the success of Black Panther, Lupita Nyong’o stole the show in a strappy black and silver gown with a pleated train spread regally on the red carpet. The red lips further accentuated her flawless skin. As far as being experimental goes, Lupita owned it in this edgy Elie Saab creation. Despite breaking the (unofficial) dress code, Kate Middleton looked like a million bucks in dark green. Her emerald necklace and earrings shone brightly complimenting her dewy complexion. Her decision to wear green and ditch black has sparked off Twitter wars with people expressing their disappointment at her choice of color. Salma Hayek proved she’s a dedicated Gucci girl with this neat, black Italian-crafted number. The pink and green rhinestones on her waist, neckline and cuffs saved it from being just another black dress. Trust her to not break the protocol and yet stand out.

Now we love Natalie Dormer but we are not feeling her sheer cape. Her extra tassel earrings are not helping her look either. It could be possible that the Game of Thrones star put on a bigger size because her train was lying on the carpet the whole time…in a pile. The British actress must have sent chills down people’s spine as she wore a sheer, black number to Albert Hall, bearing the cold February London air. Full marks for endurance but sadly, her 90s Goth-inspired style felt a little misplaced here. Also, why is there a golden crown resting on her head…? She looked fine till we placed our eyes on those shoes. You’ve had your fun, now get rid of them. Shoes are integral, ladies. Bad shoe choices can even make an Armani Couture creation look like its meant for someone in a 90s emo girl band. How did Allison Janney get into those sleeves? How does she plan to get out? Is it safe to get yourself in there?

Neha Dhupia says she was frowned upon for wearing loose clothes,...

22 Cute “Outfit Of the Day” photos of Ellie Eigenmann